Now that we’re past the rush of Black Friday, Shop Small Saturday, Cyber Monday and Giving Tuesday, how are you prioritizing where and how to shop?  Every dollar you spend has an impact: featured here are four wine producers with local connections, and all worthy selections for the wine-lover on your list! 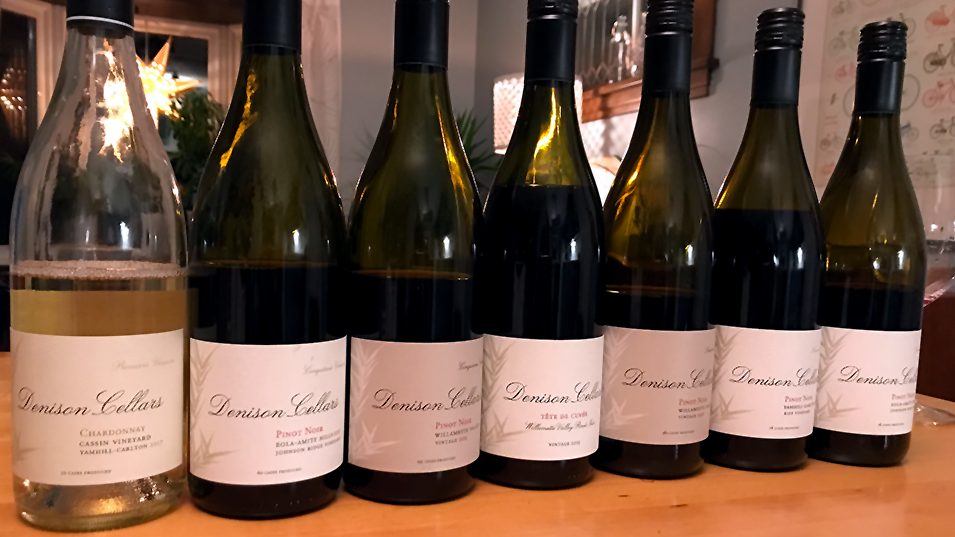 I had the opportunity to catch up with Minnesota native and now Oregon winemaker, Tim Wilson, during his recent trip to the Twin Cities.

Wilson, a 20 year veteran of the wine industry, cut his teeth in the world of wine under labels including Chateau Ste. Michelle (Washington), Edna Valley Vineyard (Central Coast, California) and Benton-Lane Winery (Oregon) prior to launching his own label, Denison Cellars, with production based in the heart of Willamette Valley Oregon. Wilson’s focus is on establishing deep-rooted relationships with select growers and highlighting them in his limited-production single vineyard wines.

Wilson knows well the character of the vines in each of the vineyards he sources from, carefully monitoring their development throughout the season. In addition to single-vineyard labels, Wilson demonstrates masterful blending of these plots via a Willamette Valley regional label and, Tête de Cuvée Pinot Noir, the crown jewel of Denison Cellars’ portfolio. Tête de Cuvée (available only through Denison Cellars) is made with the goal in mind to create the “most interesting wine” as Wilson puts it, of any given vintage, produced by selecting the wines for this blend first, above all other labels.

We tasted one Chardonnay, and six Pinot Noir wines, each featuring a unique character and expression of the fruit and the land.  A Pinot for every price point, here are a few of my favorites:

I picked up this bottle of cat-wine, because it was cute, and pink — and it had a rad screen print on the bottle. Also, I was making grilled BBQ chicken and I thought it might pair nicely with a summer day. I was right about both pairings. Fast-forward to blizzard-season when I received an invitation to a collaboration between Minneapolis brewery Indeed, and Napa-based Gamling McDuck winery — the label of pink cat-wine I’d had earlier that year.

As it turns out, Adam McClary and Gabrielle Shaffer, the vintner duo behind Gamling McDuck, are former Minnesotans. In a science-experiment turned kick-ass sour beer, a load of Cabernet Franc and was shipped to Minnesota and intentionally introduced to Brettanomyces, a wine-fault causing bacteria, as part of the process of creating a wine-grape infused, barrel-aged sour beer. The result? Amazing.  But, we’re not here to talk beer.

Gamling McDuck’s Cabernet Franc started my love-affair with the grape: red, rose, or sparkling, I can’t get enough of Cab Franc’s sweet, savory and earthy profile.

Page Knudsen Cowles grew up in the Pacific Northwest, graduated from college out east — twice — from both Yale and Harvard, yet has called Minnesota home since marrying a Minnesotan over 30 years ago.

Knudsen Cowles, a Saint Paul resident, spent her teenage years digging in the clay-loam soil of Oregon’s Willamette Valley, taking part as her parents Cal and Julia Knudsen planted one the area’s first, and for many years, one of the largest, vineyards in the Willamette Valley.  From the early 1970’s through much of the 1980’s Knudsen Vineyards’ 125 acres were bottled under the Knudsen-Erath label. In the late 1980’s Knudsen Vineyards began a long-term partnership with Argyle winery as a primary grower which continues today, and the Knudsen-Erath label was dissolved.

In 2009 Knudsen Cowles and her brothers inherited the vineyard after their parents passing, and decided to honor their parents legacy and passion for wine with a return to winemaking with a family label. The 2012 Knudsen Vineyards Pinot Noir wine was released in 2014, vinted under the watchful eye of Argyle winemaker Nate Klostermann, who happens to be a Wisconsin native, and graduate of the University of Minnesota. 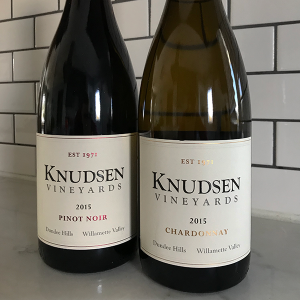 A pronounced nose, with aromas of lemon curd, fresh apple, vanilla, and white pepper. The palate matches the nose, while also expressing pear and crisp minerality with a very long finish of lemon-lime flavors. 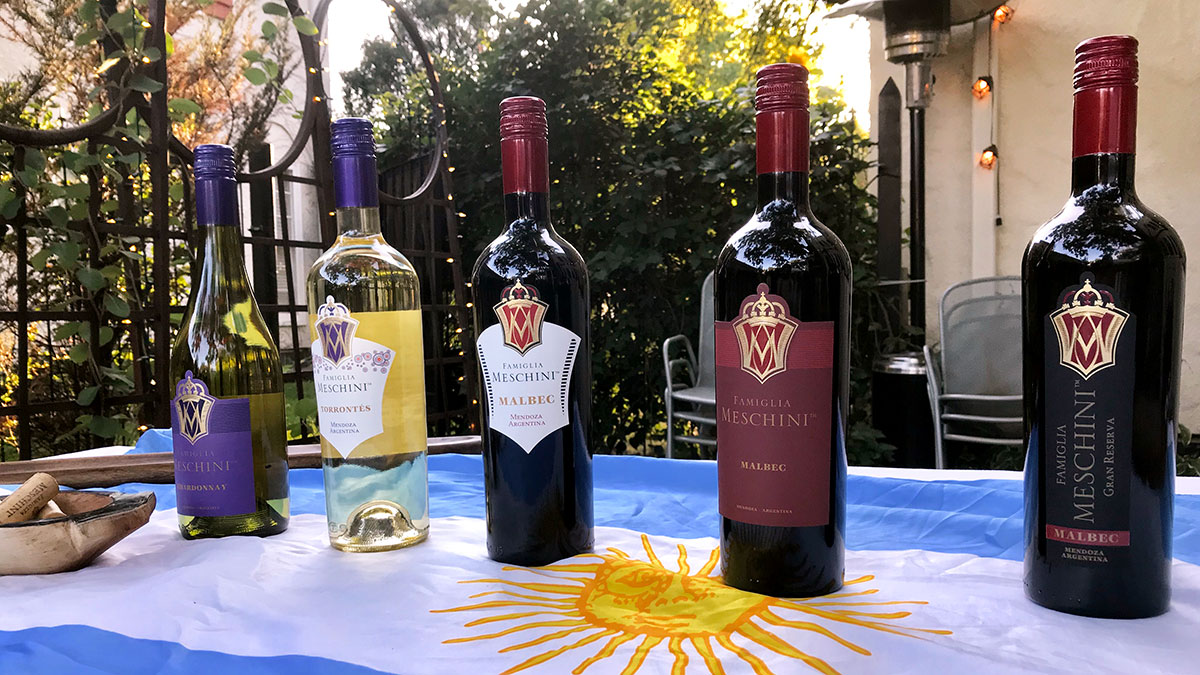 The family behind this label is a Minnesota family as well. Eugenio Meschini is the third-generation in a winemaking family from Argentina, who fell in love with a Minnesotan and has called the Twin Cities home for over 25 years. I was blessed to spend a fall evening with Eugenio and his wife Teresa sipping wine and learning about the food and culture of Argentina.

Meschini wines are widely distributed throughout the metro, and while I highly recommend them all, here are a few of my favorites: 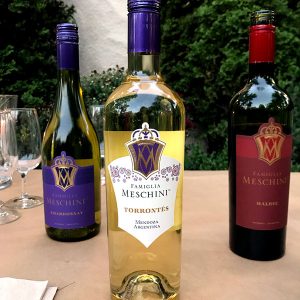 Torrontes, one of Argentina’s signature varieties, is known for its lighter body and pronounced floral/perfume aroma and flavor. Meschini’s lightly sparkling semi-dry Torrontes is blended with 13% Chardonnay which gives the body a boost, and rounds out the flavor and aromas, dominated by stone fruit (peach, apricot), honeysuckle and a bit of saline on the palate. Meschini’s frizzante Torrontes, can span from apertif to dessert wine — in fact, I would challenge you to pair all your courses with it!

“If you’re in a wine shop and see an Argentine Cab, grab it — because it’s a bargain,” Meschini  noted. Mendoza Cabernet Sauvignon are increasingly being recognized to compete in style and quality with those of Napa, but at roughly one-half to one-third of the price. Famiglia Meschini’s Cabernet Sauvignon has great depth of flavor: ripe red frut, black currant, and earth, maybe even a hint of smoke. Its spicy, full-bodied style was the perfect compliment to salt-crusted wood-fired Argentine steak. ¡Salud!