“They Make a Lot of Fruit Wine There”

“Now, when it says notes of peach and apricot, does that mean those were actually used to flavor the wine?” my sister asked the guide on a tour of a California winery.

“Ahem, no. Wine in California and France and Italy is made from grapes,” he said, dripping with condescension. “Are you from Wisconsin? They make a lot of fruit wine there.” Though he was one state off about my sister, he was right about the other part. And Wisconsin vintners are proud of it, as well they should be.

Misplaced coastal snobbery aside –– does he think French and Italian viticulturists would list California in their company? (they wouldn’t) –– wine can be made from many fermented fruits, and while you may have tried plum wine with sushi or dug out Granddaddy’s dandelion wine recipe, you probably haven’t tried crabapple wine. Herdie Baisden would like to change that.

Crabapples in the Midwest

Baisden originally bought some crabapple trees for their role as traditional components in Midwestern jams and preserves, just one of the many products he and his wife Carol Wiersma produce at their 80-acre (that’s 4,000 apple trees — a lot of apples by any measure) Maiden Rock Winery & Cidery in beautiful Stockholm, Wisconsin, located a legitimately scenic 45-minute drive south of the Minnesota-Wisconsin border crossing at Hudson. But he was so impressed by the flavor of their juice he decided to experiment with it for the purposes of making wine. 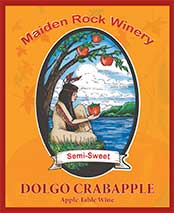 Enter Maiden Rock‘s Dolgo Crabapple semi-sweet table wine — the Dolgo part is the name of the main species of crabapple used, borrowed from a word meaning longevity in Russian, the country from where the trees were originally imported to the midwest for their hardiness. Recommended to be served chilled, the wine is the color of an orangey rosé, and while distinctly wine by taste and mouthfeel, it’s also distinctly it’s own beverage — crisp and tart in a way grape wine isn’t, but with enough body never to be mistaken for a cider. Baisden says it pairs well with white meats like chicken and pork, and I believe him — it seems especially well-suited to pairing with a savory meal or even being employed in the cooking itself. (I’d really like to try a pork roast drenched in this stuff.)

What technically separates a fruit wine from a cider is the alcohol content — a 7% cutoff according to Baisden — but they’re also fermented differently to bring out very different flavors. Starting last year, Maiden Rock also brews a hard cider from crabapples, “Crabby Cider” (for crabby people, presumably — the bottle is emblazoned with an angry crustacean) that tastes much like a hard cider made from non-crab apples but without the over-sweetness that can often accompany more than a few sips, lending itself particularly well to comfortable drinking.

While the nature of the crabapple itself — a fruit that’s not usually eaten on its own — might pose a marketing challenge, Baisden says it conversely piques the interest of many people looking for a unique flavor: “There’s an issue in terms of the marketing challenges. But for those people who are interested in exploring, that can be an attraction, because they’ve never heard of a wine that’s made from crabapples.”

In years past, Maiden Rock has corked more than 3,000 bottles of Dolgo Crabapple wine, but Crabby Cider has eclipsed the wine in popularity to the extent that Maiden Rock will cut into the wine’s production this year to produce more cider, so get it while the getting’s good. Crabapples are smaller than regular apples, so the supply of fruit is especially finite. Maiden Rock does everything onsite except the bottling of the cider — adding carbonation requires special equipment.

Maiden Rock Winery & Cidery produces a number of other apple wines and ciders available straight from the manufacturer as well as in some Wisconsin liquor stores. Select Minnesota liquor stores including Surdyk’s and Haskell’s carry Maiden Rock products intermittently.

Save
The folks at Maiden Rock Winery & Cidery kindly provided beverages for our sampling. Opinions and recommendations are those of the writer.