Fine French cuisine. In a culture where showing your worldliness on a first date means pad Thai, shawarma or Korean barbecue at a bare minimum, the idea that there’s something special going on in a French kitchen might seem almost old hat. But maybe all your efforts to replicate the succulent reductions and glazes that satisfy palettes from Alsace to Marseilles have been doomed from the start. Rigged, if you will. Because you didn’t have the secret ingredient: verjus.

Originally, husband-and-wife vintners Chad Stoltenberg and Sheri Stone of Locust Lane vineyards in Holland, Minnesota, grew grapes and sold them to other Minnesota wineries. But they had always had more of an interest in the culinary side of viticulture. A trip to France to complete Sheri’s master’s degree fostered a newfound interest in producing culinary products with their grapes.

“We were already researching other things to do with the grapes in case something happened and we were stuck with five acres’ worth of grapes,” Chad says. Locust Lane is located on five acres in the southwest corner of Minnesota, where extreme winds can lead to winter decimation of grape vines through moisture loss.

Much of the resurgence of verjus on the international foodie scene has been thanks to Australian celebrity food person Maggie Beer (think Australian Paula Deen minus the racism – I assume, I didn’t look that closely), who started producing versus after just such a decimation rendered a vintage of her grapes unusable for wine. Chad and Sheri, however, first encountered verjus in France itself.

Verjus is the pressed juice of unripened grapes. Because it is not fermented, it has no alcohol content, but it is highly acidic. Its name literally means green juice in French, so verjus rouge is green juice red, which sounds a bit like a decidedly non-classic Dr. Seuss book. It’s a key component of a good French onion soup. “You can even pickle stuff in it,” Chad says.

Verjus was a staple of the medieval European kitchen before the tropical interloper lemon edged it out, but it never disappeared completely from fine French cooking, and it remained a staple of Middle Eastern cooking under the monikers husroum and ab-ghooreh. Chad’s brother-in-law is Persian, and Chad delights in supplying his branch of the family with verjus in exchange for word back about how they put it to use.

Regarding the flavor, Chad says, “Because you’re harvesting them so early, the grapes don’t really have a lot of varietal character compared to grapes harvested fully ripe. You almost avoid character. It’s basically just tart. Lemon juice tastes like lemon, vinegar kind of burns, verjus is just sour and tart without much flavor, so it’s attractive for candy makers and jelly makers. It makes everything taste more like itself, like salt used properly. It intensifies and enhances the existing flavors because it’s acidic.”

Chad and Sheri initially planted a variety of cold-climate varietals to see what would survive in the harsh conditions. Their acreage has been made up of a hodgepodge of different grapes ever since. When they finally bottled their first commercial verjus in 2012, they had been growing grapes for seven years, including Marquette, La Crescent, Brianna and Frontenac Gris among others. While all of Locust Lane’s grapes are still sourced locally, they’re not all their own anymore – they’ve exceeded their own ability to produce grapes and now buy grapes from many of their neighbors.

“We’re always looking for more growers as we keep expanding,” Chad says. Their pride in supporting local farmers remains strong: “Lemons have to come from California, Florida or Texas, and balsamic vinegar often comes from Italy. There’s no reason those types of acids in cooking have to come from halfway across the country or world.”

Locust Lane is the chief producer of verjus in the center of the country. There are producers on the coasts but no others in the Midwest. There’s no single avenue through which Locust Lane does most of its business – they sell some verjus in stores directly to foodie consumers, but a lot also goes to bars, jelly makers and other businesses that use it in their own products.

Locust Lane also sells some other verjus products on their own – three flavors of jelly made with verjus, almonds flavored with verjus designed specifically to pair with cold-climate wines varietals (despite his culinary predilection, Chad is no stranger to wines – he’s trained an as executive-level sommelier and served as a judge at August’s International Cold Climate Wine Competition, and a baby balsamic vinegar  their highest-selling item directly to consumers. Locust Lane products can be purchased in Surdyk’s, Lund’s & Byerly’s, and directly from Locust Lane.

Get your cook on 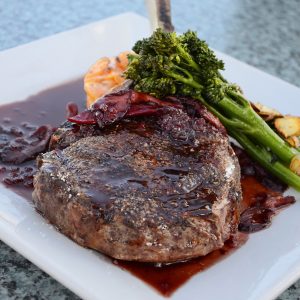 When used as a replacement for another acidic ingredient such as vinegar or lemon juice, verjus can be used at a 1:1 ratio. At $15 for a bottle that I used two-thirds of for a mustard-shiitake reduction to go over lamb, Locust Lane’s verjus can seem a little pricey.

As Chad succinctly put it, “it’s similar in price to cooking with good wine, good vinegar or fresh lemon juice, but it’s more expensive than cooking with cheap wine.”

So maybe it’s not something you’ll incorporate into your everyday cooking, but verjus could be just what le docteur ordered to “Frenchify” a dish with a secret ingredient for that occasion when you want to impress. Indeed, as someone who’d never heard of verjus before a few weeks ago but has been to France four times, I noted an unmistakably French aroma, reminiscent of apples and onions but without any of the harsh notes you might associate with either, wafting in the kitchen as soon as the verjus entered the sauce. The end result was buttery but had no butter in it, and the onion-heavy concoction pleased even a usual onion-hater. Verjus rouge even boasts the same antioxidant effects as red wine.

Get your drink on

“Verjus and a bottle of champagne or sparkling water and a cinnamon stick, and you’ve got a non- or lightly alcoholic cocktail,” Chad recommends. He notes some people, like his Persian brother-in-law, even enjoy it on the rocks.

Some cocktail recipes recommend verjus blanc as a replacement for dry vermouth in a vodka martini. I didn’t have any olives on-hand for a proper (and photogenic) martini, so I tried a splash of verjus rouge in addition to the sweet vermouth in a Manhattan. It makes for a noticeably tart, slightly watered-down version of the classic cocktail. An experienced whiskey drinker who is already suspicious at the mere presence of ice would probably want the verjus in place of the vermouth so as not to dilute the precious brown stuff any further. But the version with both would be perfect for, as one patron asked me recently, “getting his girlfriend into whiskey.” (I dunno, dude; let the lady drink what she wants.)

I whipped up a “girly” cocktail (no judgement – I confidently order brandy Alexanders and strawberry margaritas as a red-blooded man) with some ingredients I had on hand. The verjus has a similar acidic quality to white wine, so it’s not unlike a cocktail that has spirits mixed with champagne, only without the extra alcohol (boo hoo). Shaken with cognac, bitters and honey and garnished with a lemon twist, it makes for a sweet, tart stinger.

Fill lowball glass with ice
1 ½ oz whiskey
½ oz sweet vermouth and/or ½ oz verjus rouge
Garnish with a maraschino cherry
(For a verjus Rob Roy, use Scotch whiskey – but don’t waste a single malt on a cocktail.)

Fill shaker with ice
Dash of rhubarb bitters
1 oz Cognac
¾ oz verjus blanc
¼ oz honey
Shake and strain into Champagne flute
Garnish with lemon twist
(To make a lemon twist, cut a slit into the center of a slice of lemon. Cut out all the fruit innards and twirl the rind up tight. Rub the inside of the rind along rim of glass before dropping it in.)