Editor’s Note: I had the pleasure of meeting Eddie as a guest speaker at wine school, where he shared his captivating story of falling in love with Mexican wine country. I’m thrilled he was able to help me bring this feature to you!  A delightful storyteller and skillful wine educator, Eddie specializes in private, educational tasting sessions (think: you’re throwing a dinner party, with a twist — Eddie will bring the wine, some learning and lots of fun!)   Unfortunately, Mexican wine is not widely available in distribution in the US (we hear, a few places in California…)  So for now, you’ll just have to get out to Valle de Guadalupe to try it!  If you do, let me know what you think.
Never stop exploring.  Cheers, Lauren

Ensenada, Baja California is on a beautiful bay looking out to the Pacific Ocean… 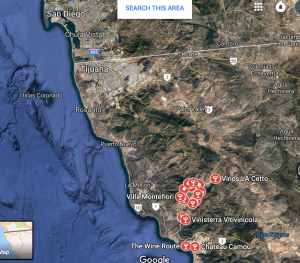 Ensenada is 84 miles, or 2hrs and 11 minutes south of San Diego CA.

Just north of Ensenada is Highway 3 which has been named Ruta Del Vino or wine route, because it now winds through hundreds of acres of vineyards that are producing surprisingly excellent wines in a rocky, dusty valley with mountain ranges on both sides. The valley is called Valle de Guadalupe and everyone who is lucky enough to know about Mexican wine knows that this is where the best ones come from.

In 2005 I was lucky enough to be taken on a tour of the region by my brother-in-law, Jim, a retired navy man and artist who told me (because he doesn’t drink): “You drink, I’ll drive!”

“Everyone in Ensenada”, said Jim, “is saying that this region is going to be the next Napa.”

There was a new highway, a limited access freeway of sorts, that had just been opened from Tijuana to Ensenada, so the trip was a fairly breezy one and the ride was spectacular at times, like CA HWY 101, as it rode along a ridge overlooking the Pacific Ocean. We spent one night in a fairly modern hotel and left the next morning to see what Baja wine was all about.

I’ve heard that in its early days, Napa was a lot of dirt roads and inconsequential looking barns and outbuilding that served as wineries. Well, such was the case in Baja in 2005. As I look at my notes from that trip I see just 8 wineries. There are many more now.

The first stop: Casa de Piedra: which translates to House of Stones. It reminded me of a gallery in Soho NY, modern minimalist architecture. Interesting looking people wandering about.

I learned that the winemaker, Hugo D’Acosta was something of a local legend as he had studied in Bordeaux. At the time he was only making one red wine and one white wine and he was already sold out. Later on in the trip I was able to taste the red in an Ensenada restaurant and it was not cheap, but it was very, very good. Full bodied, rich, long, complex and lively.

Across the street was Vina Liceaga, owned and operated by the much respected Eduardo Liceaga. I wanted to try some wine, but “Eddie” was not around so we moved on.

Up the somewhat paved road was Mogor Badan, a small winery that at that time produced 500 cases but once again, no appointment, no tasting.

We pushed on to a small “town”, really more like an intersection, called Francisco Zarco and found a place to have lunch that also made wine called ‘Suenos” which means dreams. With broken Spanglish, (my brother in law spoke a little) we were able to eat and drink and laugh about the dreams that all of us have.

We then spent the night at truly unique and ‘upscale’ for the area, resort called Adobe Guadalupe. The owners are very gracious and they poured and sold 3 magnificent wines that were individual blends so each had its own character. It turned out that the consulting winemaker was none other than Hugh D’Acosta, the top winemaker in Mexico!

From this point on, it was dirt roads….

We found an enigmatic winemaker named David Bibayoff who had emigrated from Russia and his place didn’t look like any winery I had ever seen. Goats wandering around, old trucks handmade buildings, but he offered me some wine that he had made from Nebbiolo grapes and it was amazingly deep and smooth even though it had only 1 year of barrel aging.

Off that same dirt road we found Chateau Camou, so named for a French grandmother if we understood correctly. They had a beautiful cool cellar, which was welcome, and I tasted their wines, all of which were robust and concentrated. I fell hard for the Zinfandel which I put up against a much more expensive California version when we returned and it came out on top.

Then we hit the jackpot. Monte Xanic, a modern winery that was hosting a luncheon for the press that day and since we were there, we got invited.

Gourmet local food, many of the local winemakers, including D’Acosta and Liceaga were there. The Monte Xanic winemaker Hans Backoff and his son Hans Backoff, Jr were terrifically gracious, and their wines were so fine and sophisticated. They had a delicious white Bordeaux blend called Vina Kristal, named for Hans’ daughter and some really fine red wines including one Cabernet Franc 2012 that I smuggled back on a more recent visit, and poured for Nikki Erpelding’s Wine Professionals Class at St Paul College. I believe it was a hit!

The last two wineries we visited were the veterans, La Cetto and Domecq. At that time Domecq was making a lot of brandy but L.A. Cetto was making a very decent Chardonnay for a very competitive price and an aged Nebbiolo that was winning awards in California. On a more recent trip I tried a Domecq Cabernet and was very impressed.

So what am I saying?

Go to the Valle de Guadalupe! It’s still like Napa/ Sonoma in the 70’s, a burgeoning new wine region on the brink of explosion. Do it on your own, or take a tour. The valley gets cool ocean breezes at night, and plenty of warm sun during the day but as vines are being planted up the elevations, complexity and subtlety is on the rise. (no pun intended).

Eddie Cohen is the Wine Educator and Sommelier at Drink Wine and Learn, offering everything from wine consulting to private, educational tasting sessions. Whether you're planning a corporate event or dinner party with your best friends (and are just looking to put a new twist on it), Eddie is available to be your personal sommelier and help make the complex world of wine wildly fun — and much simpler. Learn more at, www.drinkwineandlearn.com Certifications: WSET 3 Advanced / Certified Sommelier. Instagram @Drinkwinelearn