A dry, sage-brushy desert on the border of British Columbia: The Okanagan Valley

Since Minnesota is on the border with Canada, some might assume Minnesotans know more about Canada than others in the U.S. do. Yes, we have a geographical advantage, but I daresay many people in the rest of Minnesota don’t even know that our state borders two different provinces nor can they correctly identify them. Growing up in a Northern Minnesota border town, there were many things I knew about Canada, however, it wasn’t until I was 40 years old that I realized Canada had a significant wine producing region in British Columbia.

Perhaps my knowledge of our two bordering provinces was greater than the average mid-westerner, however what I knew about British Columbia was limited to my idea of what the coastal city of Vancouver might be like. I imagined a busy city with beautiful views of the ocean and mountains, followed by endless, lush green forests. Not a bad description for the western coast of British Columbia. But then Ie moved to the state of Washington and found myself in a desert. Yes, a dry, sage-brushy desert on the border of British Columbia: The Okanagan Valley.

Ok, so maybe it is technically semi-desert, but honestly when it is a very dry 95 to 100ºF in July with an average annual rainfall around 10”, it’s merely semantics. In fact, the town of Osoyoos, BC has a Desert Centre that you can visit and learn all about the ecosystem in this pocket of BC that is home to some native shrubs, grasses, cacti and desert dwelling animals that you won’t find anywhere else in Canada. Regardless of how it is classified, this valley that stretches more than 100 miles from Osoyoos to north of Kelowna is a very special place on earth. The best part of the Okanagan Valley is the big long lakes that run vertically through it, lined with orchards and vineyards as far as eye can see.

The first grape vines were planted by Father Pandosy who came to Kelowna as a missionary in the 1850’s. These vines made passable sacramental wines, but not the high quality wines of today. After prohibition, winemaking in the valley continued to grow as they experimented with hybrid varieties. However, it wasn’t until the 1980’s that the vitis vinifera vines were planted and the real magic began. There are now more than 180 licensed wineries in the valley and my husband and I visited 56 of them at the end of July. After recently experiencing roughly one third of the wineries, plus the 40 more that we visited while living there, I would have to say I am likely the leading Minnesotan authority on visiting the Okanagan Valley!

Traveling with my husband from International Falls, MN it made the most sense to fly from Winnipeg, Manitoba to Kelowna, BC. We are closer by 55 miles to the airport in Winnipeg than we are to the Minneapolis-St. Paul airport. Plus the drive is easier and we cross into Canada at a familiar land border. Technically speaking, we had a domestic flight (within Canada), so there was no extra time in the airports to clear Customs. Bonus: Canada lets you keep your shoes on when you go through the security line! If you happen to live in Northern Minnesota, I recommend driving up to Winnipeg or Thunder Bay to fly within Canada.

When we arrived in Kelowna, we rented a car at the airport and were on our way. Having lived just 90 miles from there five years ago, we were familiar with the route and easily found our way down the valley to our AirBnb, home away from home for the week. We really lucked out with a cozy suite, complete with our own patio and a private entrance in the basement of a beautiful home tucked amid the cherry orchards.

We went on this vacation with a purpose. My husband and I like to keep our wine cellar well-stocked with lots of variety, but we were out of the BC wines that we had shipped to Minnesota when we moved back. We also knew that we needed more whites and rosés in our inventory, which the Okanagan does so well. Pinot Gris is the leading white grape planted there, and Merlot the leading red. We found a couple of wonderful Chardonnays that had been fermented in steel tanks, a few Alsatian style Pinot Gris that we loved, and several aromatic Viogniers! Many wineries in the region make a single varietal Viognier, which is rather hard to find elsewhere. Since it is a favorite of my husband’s we made sure to scope them out.

With a mission to fill our cellar, we also had to have a strategy for the seven days. Spit, spit, spit. It may sound rude and at bit disgusting, but trust me, it is completely acceptable and even encouraged in the wine-tasting world! Every winery provides spittoons at the tasting bar. We knew that if we wanted to visit as many wineries as we could each day, and drive from one to the next, we could not be ingesting that amount of alcohol, nor did we want to! I am pleased to report, it was a headache-free vacation and we tasted no fewer than 300 different wines.

We spent the first two days on the Naramata Bench and visited 21 wineries. 10 the first day and 11 the next. You need to understand, these were within at most a 5 mile range, so we spent little time on the road. Our usual plan of attack was to start at 10am when many of the wineries opened. We would average a half hour at each winery, and do about four tastings before lunch time. Then we would find a winery with a picnic spot (many have lovely patios and picnic spots) where we would sit for a while, drink water and eat the cheese, charcuterie and crackers I packed for the day. Then we would hit another five or six in the afternoon until it was time for whatever dinner plans we had made.

Our next two days were on the Bottleneck Drive in Summerland. One day we went to eight wineries on the east side of Highway 97, and the other day we went to the west and visited eight more. Summerland was my personal favorite place to taste on this particular trip. There is a higher concentration of small boutique and winemaker-owned wineries. The feel of the tasting room is more personal and we often talked with either the owner, the winemaker, or both. Generally speaking, that is still common in much of the Okanagan, but there was just something a bit more welcoming about the fine folks on the Bottleneck Drive.

We also spent two days in the Kelowna area. One day north of the airport in what is known as Lake Country, and one day in West Kelowna. There are more large wineries near Kelowna than there are in Naramata or Summerland. The views are stunning and the tasting rooms are like beautiful fine art galleries. However, the personal touch is missing at some of those higher volume wineries. At one stop, the tasting room attendant was reading her cheat sheet while she told us what we should be tasting in the wine. Another of the wineries that wasn’t yet too big was under construction, and we heard from the guy behind the counter that the owner had sold to Asian investors who were expanding production and building a whole new tasting room. We had heard the same at another earlier in the week, which makes me think the Okanagan is on the cusp of bigger and better things!

Why Okanagan Valley should be on every wine-lover’s radar

Honestly, I don’t know if bigger will bring better things, but possibly it will help their reach to expand beyond British Columbia and Alberta. Not much wine is exported from the Okanagan, and I would love to see it in our local Ontario liquor store some day. This region should be on every wine-lover’s radar. It is still an affordable, navigable area to visit, and I am living proof that it has endless opportunities for tasting. Granted there are exceptions, but the trending price for a tasting is still $5.00 for five (or more) wines which is usually waived with a one-bottle purchase. Bottle prices range from about $18 to $50+ in Canadian funds. We averaged about $25 Canadian per bottle. (We purchased 57 bottles!) At the moment, the US dollar is stronger, so you can take 25% off that figure.

Traveling with wine from Canada to the US

It all arrived safely, via UPS! If that’s the only way we can get #bcwine in Minnesota, I guess we’ll have to make the trip more often! Can’t wait to start reliving the memories, one bottle at a time! 😍😍🍷🍷🇨🇦🇺🇸 #okanaganwine #okanaganwineries

You may wonder how in the world we brought back so much wine from our trip into Canada? Having lived in the area, we knew the secret to stocking our cellar full of BC wine once again. Our second to last day we drove south to the Canada/US border and crossed into Oroville, Washington, where we had once lived. The duty we paid at the border totaled less than $10 on that amount of wine. We visited some old friends and then brought four cases of wine to a local business that we knew had a license to ship wine. They packaged them and sent them to our home in Minnesota and it all safely arrived a few days after our return. The bottles we purchased on our last day traveled safely in our suitcases in the Styrofoam inserts I had planned for them.

As we drink through our British Columbia wine collection over the next few years, the memories of a most incredible vacation will come flooding back. If you are looking for a great place for a wine-tasting trip, consider Canada’s only desert. The Okanagan Valley will welcome you and leave you wanting more! 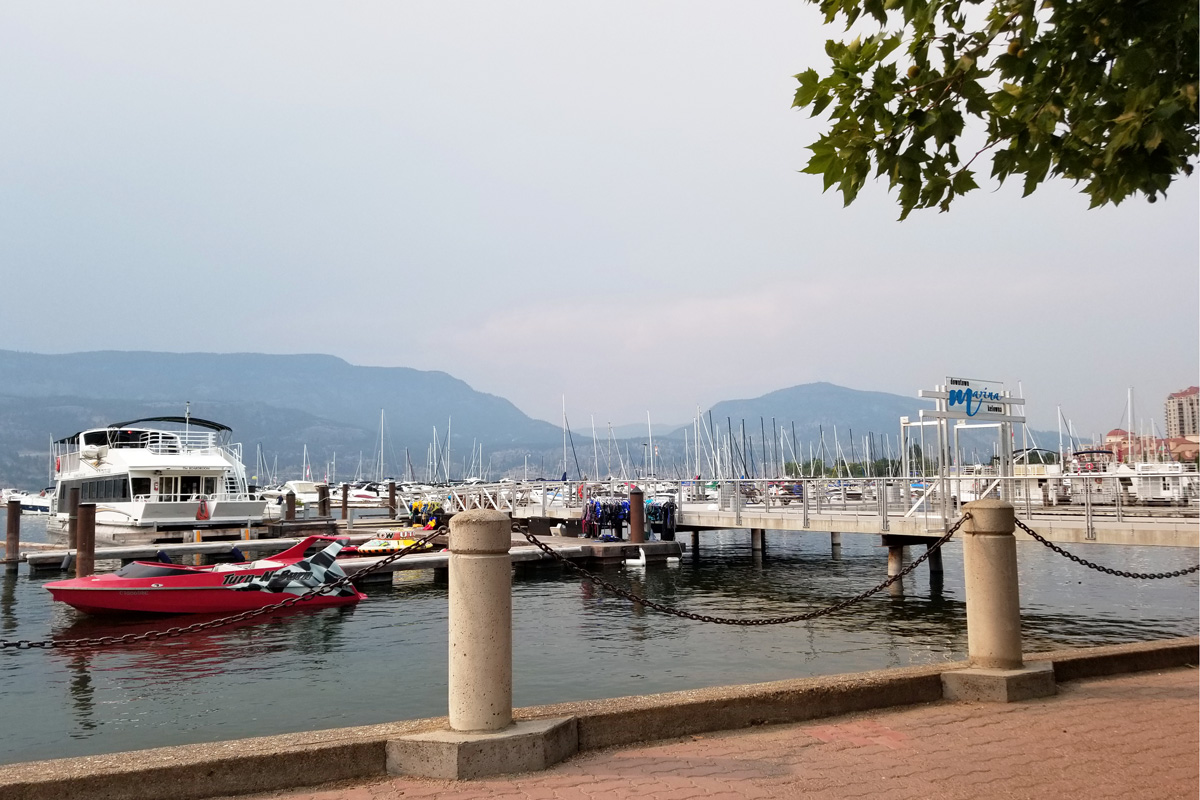 Cathy Blankman is a recipient of the Wine and Spirits Education Trust (WSET) Level 2 Award in Wine. Her passion for wine is always evolving as she learns and pursues further wine education. If you would like to learn more and see what she is tasting, follow her on Instagram @cathylouwho.