¡Salud! This summer, give Kalimotxo a try. - Minnesota Uncorked™
Skip to content

Of groups who know how to get their party on, the Spanish seem like they’d know what’s up, right? Kalimotxo, (pronounced Kal-ee-moach-oh) a drink made up of dry red wine and Coca-Cola, is what Spanish locals actually drink all summer long — they’re too lazy to chop up fruit for sangria!

Pioneered in the ‘70s in the Basque country as a way to make low-quality wine palatable — boxed wine is still a popular ingredient— Kalimotxo has an appeal that extends beyond improving sub-par wine, and has spread across the globe, from Eastern Europe to South America and China. Alternatively known as Rioja Libre and various other names referencing things such as diesel fuel, Mussolini, or parts of the female anatomy, the drink is far milder than its aliases would imply (although it is popularly fortified with blackberry liqueur). 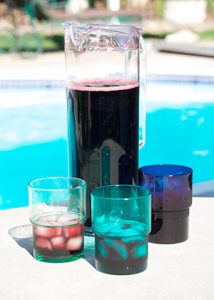 The recipe couldn’t be simpler: half wine, half cola, served over plenty of ice in highball glasses. Maybe add a slice of your favorite citrus to garnish if that doesn’t erode the low-prep appeal. Contrary to what you might imagine, the cola flavor gets totally subsumed by the wine, leaving a product not unlike sangria, though lightly carbonated, and without all the preparatory fuss.

Red wine and Coca-Cola?! We assure you it’s not gross!

Even though cola can be syrupy, the mix is decidedly lighter than wine, with a body differentiating it from most soft drinks but refreshing and un-tart in a way that’s ideal for summer-day drinking when you don’t want to purse your lips after every sip. Kalimotxo isn’t dependent on carbonation in the same way as soda, so a pitcher can actually last a week or two in your fridge.

While some Coke purists would surely recommend you track down cane sugar Coca-Cola, usually known as “Mexican Coke” to Americans (as opposed to our high-fructose corn syrup domestic Coke — European Coke is actually often sweetened with beets of all things, which can be processed into sucrose, the same sugar in cane sugar), the Coke flavor in Kalimotxo is not prominent enough to warrant dithering over the choice.

In a drinking culture increasingly interested in unique cocktails fit for a Sunday afternoon in the summer — bottomless mimosas, Bloody Mary bars and fruit salad sangria — American adoption of Kalimotxo might just be the next logical fad!